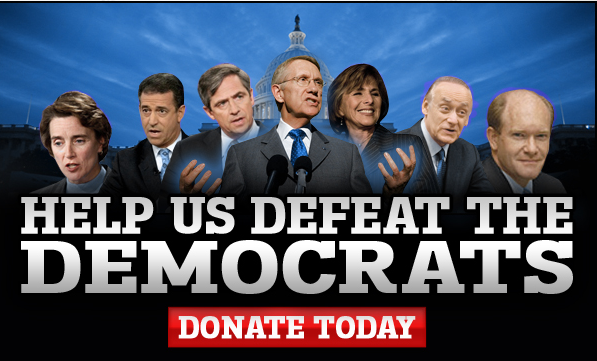 Elections have a way of either hiding a candidate’s true identity, or shining a bright light of truth, thus exposing their true character.  This past November’s election was no exception.  Due to the Tea Party candidates and a large Tea Party voter turnout, the bright light of truth found some neo-conservatives in the Republican party to be anti-Tea Party to the extent that they helped cause candidates to lose senate elections in key races to the delight of socialist Democrats.

The main culprit in my opinion is John Cornyn, the junior senator from Texas.  His show of disdain for Tea Party candidates is not shocking, but is at the same time disappointing.  Cornyn’s disdain for Tea Party candidates was shown through the lack of funding that was given to these candidates by the NRSC, of which Cornyn is the chairman.  On the NRSC web site, as of today, there is still an advertisement to raise money so that Democrats can be defeated. 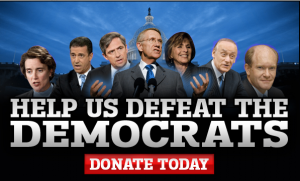 From the NRSC Web Site

The person in the advertisement that is front and center is none other than Harry Reid.  Sharon Angle was running against Harry Reid in Nevada and this race evidently wasn’t worth putting money into, even though Angle was a very good candidate who was in a close race.  Other races where Republicans didn’t have a chance to win, garnered more of Cornyn’s support.  The Carly Fiorina campaign was given 8 million dollars in the final week of a contest that never showed Fiorina closer than 9 points to Barbara, call me senator, Botoxer.

Another race that was close and could have gone down as a win for the GOP was Ken Buck’s race against Michael Bennett in Colorado.  During the primary, Cornyn and the NRSC supported a liberal candidate named Jane Norton.  Jane Norton at one point was asked in an interview who she would like to be mentored by and her answer was none other than Lisa Murkowski.

This brings us to yet another race where the NRSC supported a liberal candidate over a conservative one and even tried to undermine the conservative after he was a clear winner in the primaries.  The conservative in this race was, and actually still is, Joe Miller.  Joe Miller shocked Repubikan establishment by defeating the tax and spend liberal Lisa Murkowski.  Murkowski supports Obamacare and also supported Cap and Tax, except during the election.  Murkowski was still the heavy weight in this race since she was well known, being the incumbent.   Instead of running ads against the front runner in the race on behalf of the people’s choice from the GOP primary, the NRSC instead ran TV spots that were aimed at Scott McAdams who didn’t have a chance in the race.

This race to me is the most telling of all of these.  This race tells the true story of John Cornyn.  The light of truth has shined brightly on Mr. Cornyn and unfortunately for him, he did not fare well.  Cornyn and The NRSC have been found to prefer a liberal hack like Murkowski over a Tea Party conservative like Joe Miller.  Joe ran a good race and defeated Murkowski in the primary.  Even taking philosophical differences out of the equation, Murkowski was running as an independent, not as a Republican.  Just from a party standpoint the NRSC and Cornyn didn’t do the right thing and support their own candidate.

John Cornyn is not up for election until 2014.  It would be fitting for a Tea Party candidate to kick this joker to the curb.

Closing Comment:  Conservatives need to take names and kick butts out of the senate and congress.  I don’t think there is a more fitting butt to kick than John Cornyn’s.  Of course, I speak purely in the political realm.

Back to top
mobile desktop