Is the Volt Obama’s Volkswagen?

While similarities do exist, no, the Government Motors Volt is not Obama’s Volkswagen.  The difference that makes this vehicle so different from Hitler’s Volkswagen is that this car is not a car for all the people.

It has a price tag of 41,000 dollars and even with a tax break of 7,500 dollars, it is a steep price to pay for an underpowered automobile, especially in such a dismal, Obama manipulated economy.  With Obamacar, Government control didn’t seem to help keep costs down?  Obamacare will be different though, right? 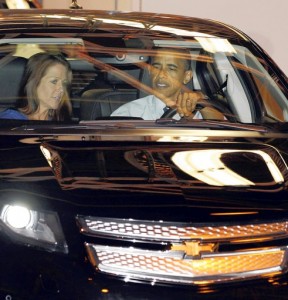 Many have laughed at the Volt’s range of 40 miles, but that range doesn’t tell the whole story of this car.  This car is not a hybrid vehicle, but it does have a gas engine.  What separates it from a hybrid is that the gas engine simply is used as a generator to run the electric motor that drives the rear wheels once the batteries are depleted of power.  The generator also charges the battery pack while it is generating power for the electric motor.  According to the Government motors web site this gives the Volt,

several hundred additional miles, until you can plug it in or fill it up again.

In a hybrid vehicle a combination of the combustion engine and electric motor, which is battery powered, drive the wheels of the vehicle.

I am a fan of the hybrid vehicles that are put out by manufacturers such as Lexus.  These layouts offer better gas mileage to save money, that’s my kind of green vehicle, while outperforming a standard gasoline powered engine.  The electric motor actually aids in providing extra horses and low end torque when needed.

I am not, however, a fan of electric cars such as the Volt.  This is a sporty looking car that costs about the same as a C class Mercedes, but it is not a performer.  The Volt goes 0 to 60 in 8.5 seconds.  For some people that is OK, but give me a gas guzzling V-8 any day.  My Dodge 1500 Hemi, could push the Volt from 0 to 60 faster than that!

As Rush pointed out,

there’s a $7500 tax credit which means that Obama and the government are admitting that nobody wants this, nobody wants it.  We gotta give you a $7500 discount.

Americans want and love the combustion engine.  We want to step on the gas, not accelerator, pedal and get pressed into the back of our seats.  Who wants a sporty looking car with a sports car price that can’t get out of its own way?  In metro areas people will risk their lives getting on the highway in these vehicles.

Back to top
mobile desktop