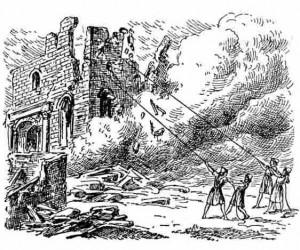 Destruction of the Temple

“And Jesus went out, and departed from the temple: and his disciples came to him for to shew him the buildings of the temple. And Jesus said unto them, See ye not all these things? verily I say unto you, There shall not be left here one stone upon another, that shall not be thrown down.”

In this 24th chapter of the Gospel of Matthew we have one of the greatest examples or proofs of the divinity of Jesus. In awe of the size and beauty of the temple the disciples point out its magnificence to Jesus. Jesus though doesn’t respond in kind by saying,

Isn’t it a beautiful building,

He is able to see ahead to 70 AD and see that the temple was burned and that the gold leaf on the ceiling of the temple melted and settled into crevices between the stones of the walls. The stones were pried apart from each other by the Romans to retrieve the gold, which left not one stone standing on top of another. Psalm 127:1 says,

Except the LORD build the house, they labour in vain that build it.

Even though God designed the temple and men built it according to His specifications, this temple did not include the chief cornerstone, but actually stood as a reminder that Christ was the stone the builders rejected. The temple of God is now in the hearts of men who believe and accept Christ. This temple in Jerusalem stood as a monument to those who rejected Jesus and had built a religion without God’s approval. This was a temple without the one, true sacrifice, in fact this was now a religion without sacrifice. The veil of the temple was torn preventing further sacrifice. The temple was part of that old covenant which was a schoolmaster to help our understanding of the new covenant, but men would not leave the schoolmaster for the Rabi or the greatest teacher. Men would not leave the substitute and follow THE TEACHER. A building, or a temple, will not stand without the true cornerstone, which is Christ Jesus. Is the building of your life, the temple of your heart, built by God? Is your temple built with the Chief Cornerstone as its foundation? Are you fastened forever to the Stone that the builders rejected? Or is your temple, your heart, your very soul, headed for destruction as was the temple in Jerusalem? Friend come to Jesus, yes, come to Jesus. In simple faith come believing that He is the Christ the Son of the living God. Come believing that His substitutionary death on the cross to take away your sins alone will save you. Come as you are and obey the Gospel, the good news. What is it to obey the Gospel? It is to do that which earliest preachers, the apostles, taught in the book of Acts,

Repent, and be immersed every one of you in the name of Jesus Christ for the remission of sins, and ye shall receive the gift of the Holy Ghost.

Come to Him today and make the temple of your heart His holy temple.