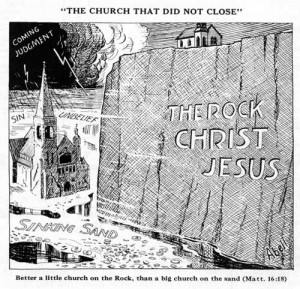 When Jesus came into the coasts of Caesarea Philippi, he asked his disciples, saying, Whom do men say that I the Son of man am?

And they said, Some say that thou art John the Baptist: some, Elias; and others, Jeremias, or one of the prophets.

He saith unto them, But whom say ye that I am?

And Simon Peter answered and said, Thou art the Christ, the Son of the living God.

And Jesus answered and said unto him, Blessed art thou, Simon Barjona: for flesh and blood hath not revealed it unto thee, but my Father which is in heaven.

And I say also unto thee, That thou art Peter, and upon this rock I will build my church; and the gates of hell shall not prevail against it.

This is to me one of the most unusual and interesting prophecies in the entirety of the scriptures. It is very easily overlooked because it is often overshadowed by the context surrounding it. This prophecy is important because it shows the omniscience of Jesus. Only God is all knowing. This verse then proves the divinity of Jesus. To get the full picture of this prophecy we need to look at its context. The verse that I am most concerned with however is verse 18.

In verse 13 Jesus asked the disciples,

Whom do men say that I the Son of man am?

The disciples answered him by saying that some said He is John the Baptist, some said that He is Elijah, Jeremiah or one of the prophets. Jesus then asked the disciples,  for all eternity, the question with the weight of the souls of men riding on it.

And Peter spoke up and said,

“Thou art the Christ, the Son of the living God”.

Peter has come to a saving knowledge of the Lord Jesus Christ. He not only believes, but this believing is unto salvation. Thou art the Christ, You alone are Christ, You alone are the messiah, the Son of the living God. Salvation is in You alone. You are God’s Son, the only begotten of the Father. You are my God. This is shouting ground, church. As we lift the blood stained banner of the cross for all to see, we acknowledge and hope to bring others to the knowledge,

“Thou art the Christ, the Son of the living God.”

Praise His name, he is THE CHRIST, THE SON of THE LIVING GOD.

“And his name shall be called Wonderful, Counsellor, The mighty God, The everlasting Father, The Prince of Peace.” (Isaiah 9:6)

“And Jesus answered and said unto him, Blessed art thou, Simon Barjona: for flesh and blood hath not revealed it unto thee, but my Father which is in heaven.”

This saving knowledge doesn’t come to us because we are so inteligent, it is imparted by God Himself. Isn’t He wonderful? The very knowledge that produces the faith that God demands is given by God to us. God is so good to us, His mercy is without ceasing. Hasn’t He been good to you? He has been so good to us. His love is without measure. While I was lost and undone, without God or His Son, Christ died for the ungodly. He died for you and me and He imparts this knowledge to us through His Holy Spirit.

This brings us to the 18th verse, the key verse in this short study. Let’s take the first part of this verse separately ,

“And I say also unto thee, That thou art Peter (Petros), and upon this rock (petra) I will build my church”.

“Thou art the Christ, the son of the living God”,

What He says next is the most unlikely of any prophecy in the bible to stand the test of time. One thing that makes this prophecy so unlikely to come to pass is the audience that heard it. The hearers of the prophecy were the disciples of Jesus. Most of these men were unlearned men, at least by the worlds standards. Of course at this point in time they are well on their way through the three year Jesus Seminary. They were also much of the time being chastised for their little faith. These were the first group of people that this prophecy makes a claim about. These men who would scatter when Jesus was being crucified would conquer the gates of Hell. This is so far fetched that for it to come to pass Jesus had to know ahead of time that it was going to come to pass. He couldn’t know this unless he knows how everything will end up. Unless He truly is the Alpha and Omega, the beginning and the end, He could not know this. He is truly divine, truly the Son God. In the midst of this rag tag group of disciples, these men who were rough around the edges, Jesus makes a statement that proves without a shadow of a doubt that He is who Peter said He is. He is the Christ, the Son of the living God. Surrounded by this weak group of men, Jesus completes the statement in verse 18 by saying,

“and the gates of hell shall not prevail against it.”

This prophecy has stood the test of time. Tyrants have shed the blood of saints and the church still stands. Scriptures have been banned by governments, but the church still stands. False doctrine has been the order of the day for several centuries at a time, but the church still stands today. False churches have persecuted the church of Jesus but God has always had a remnant. Through it all the church has held up that blood stained banner of the cross and has stood tall on its foundation, the Christ, the Son of the living God. We have plundered the gates of Hell to populate heaven. We have done this because of our foundation, Jesus Christ. He is the mighty Son of God. All hail the power of Jesus name, let angels prostrate fall!